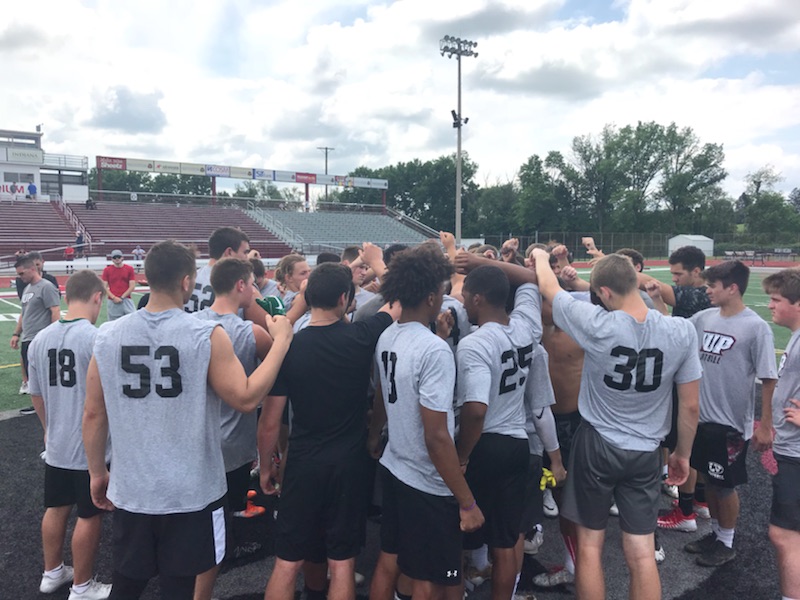 2019 IUP FOOTBALL PROSPECT CAMP
The IUP Football team is holding a one day prospect camp for high school student-athletes on Saturday, June 1st, 2019. The camp will run from 11:00 am to 2:00 pm at George P. Miller Stadium located on the campus of IUP. This camp will focus on speed and agility training, as well as, one on one coaching from our staff. We will conduct individual and group coaching sessions and competitions.

What To Bring: Cleats, work out clothes

Contact: Luke Barker at Lbarker@iup.edu , or Erik Templeton at etemple@iup.edu

Paul Tortorella enters his Third season as the head football coach at IUP in 2019 after guiding the program to a 21-4 overall record in his first two years at the helm of the IUP Football program. In Tortorella's first two seasons as the head football coach, IUP has won the PSAC Western Division, the PSAC Championship, and won the Super Region 1 Championship for the first time since 1999.

Since coming to IUP, Tortorella has directed a defense that has consistently ranked among the best in the nation. His extensive knowledge of schematics and personnel has made him one of the most respected coaches in the area.

In 2016, Tortorella guided an opportunistic defensive unit that ranked third in Division II with 24 interceptions and 35 caused turnovers. IUP’s six total defensive touchdowns was tied for sixth in the country, while its .674 defensive red zone percentage was 20th.

For six straight games the Crimson Hawks limited opponents to 20 points or less, with high-scoring rival Slippery Rock finishing with just 19 in IUP’s blowout mid-October victory. First round playoff opponent Fairmont State, which had a 10-1 record and averaged 30.0 points in the regular season, was limited to just 13 points by Tortorella’s crew.

In 2015, the Crimson Hawks finished the year ranked in the top 12 in six defensive categories – scoring, interceptions, turnovers forced, red zone, third down percentage, and touchdowns – finishing with a 9-3 overall record.

The Crimson Hawks advanced to the postseason in each of the last two seasons, combining for a 19-5 overall record.

2012 was one of Tortorella’s best seasons, as he was named the NCAA Division II Coordinator of the Year by FootballScoop. Under Tortorella’s guidance, IUP led the nation in total and scoring defense, while also ranking third in rushing defense, during a season in which the Crimson Hawks won the Pennsylvania State Athletic Conference (PSAC) championship, and advanced to the NCAA quarterfinals with a 12-2 record.

The Crimson Hawks gave up just 257.9 yards and 12.5 points per game, recording three shutouts and holding opponents to 10 points or fewer four additional times. IUP gave up an average of 80.1 rushing yards per outing, holding opponents to less than 100 yards nine times during the season. Offenses managed just 2.6 yards per carry and scored nine touchdowns in 439 carries.

The passing defense was also tough to crack, as IUP finished 17th in the nation by giving up 177.8 yards per game and 14th with a defensive pass efficiency of 101.85. Nine times quarterbacks failed to complete 50.0 percent of their passes against the Crimson Hawks, including each of the last four games. IUP racked up 20 interceptions and gave up just 14 touchdown passes.

Since Tortorella’s first season with the program in 1995, 15 IUP defensive players have earned All-American honors, while 107 have been named to All-PSAC West teams. Four players have been named PSAC Defensive Player of the Year under Tortorella, with two freshmen earning conference rookie of the year accolades.

Tortorella got his coaching start on the prep level in 1985, serving as linebackers coach at Mount Lebanon High School. He then began a nine-year stint as an assistant coach at a pair of Division I universities, including six at Maryland and three at Akron.

He joined the Maryland staff as a graduate assistant working with linebackers and the secondary from 1986-87 followed by one year as a volunteer assistant secondary coach. In 1989, he was hired on a full-time basis as special team’s coordinator and tight ends coach, and he added halfbacks to his list of responsibilities in 1990.

In 1992, Tortorella departed Maryland for Akron, where he coached defensive backs through the 1994 season before joining the IUP staff.

During his career, Tortorella has coached two players who went on to successful NFL careers. Defensive back Victor Green (Akron) played with the New York Jets from 1993-2001, the New England Patriots in 2002 and the New Orleans Saints in 2003 while tight end Frank Wycheck (Maryland) retired after the 2003 season following an 11-year pro career which saw him catch 505 passes.

First Aid/Medical Emergencies—Emergency care and first aid will be provided by first responders trained and certified by the American Red Cross. In the event that advanced medical care is needed, referral will be made to the Indiana Regional Medical Center.

Medical Insurance: IUP does not provide medical insurance for campers. In the event of illness or injury requiring treatment, hospitalization, and/or surgery, the family's medical insurance must be used. First Aid and Medical Emergency care will be provided by first responders trained and certified by the American Red Cross. In the event that advanced medical care is needed, referral will be made to the Indiana Regional Medical Center.

I hereby consent to any and all health services necessary to the Indiana Regional Medical Center’s emergency room. I give authority and power to any such physician/surgeon to render any and all health services that may be deemed necessary or advisable. I understand in case of serious accident or illness every effort will be made to contact me. I understand I will be responsible for any costs or care not provided. I understand there is risk of injury for my son or daughter while participating in this camp, and I hereby voluntarily assume all risks associated with participation and agree to exonerate and release IUP, its agents, servants, trustees, and employees from any and all liability.

Waiver of Liability, Assumption of Risk, and Indemnity Agreement

Participant’s Name: Participant You Are Registering For On Marketplace INDIANA UNIVERSITY OF PENNSYLVANIA Name of Class or Activity: Camp/Clinic You Are Registering For On Marketplace Waiver of Liability, Assumption of Risk, and Indemnity Agreement Waiver: In consideration of being permitted to participate in any way in Description of Class or Activity including date(s): The Activity/Date(s) You Are Registering For On Marketplace hereinafter called “the Activity,” the undersigned, for himself/herself, his/her heirs, personal representatives or assigns, does hereby release, waive, discharge, and covenant not to sue Indiana University of Pennsylvania, or the State System of Higher Education, part of the Commonwealth of Pennsylvania, or their officers, employees, and agents from liability from any and all claims including the negligence of Indiana University of Pennsylvania, its officers, employees or agents, resulting in personal injury, accidents or illnesses (including death), and property loss arising from, but not limited to, participation in the Activity. The undersigned understands the description of the Activity above may be changed without notice and that Indiana University of Pennsylvania will provide no compensation for any expenses or losses incurred due those changes.

Assumption of Risks: Participation in the Activity may involve travel or other activities that carries with it certain inherent risks that cannot be eliminated regardless of the care taken to avoid injuries. Health Care Authorization: The undersigned hereby authorizes Indiana University of Pennsylvania and its employees and agents to perform any acts which may be necessary or proper to provide emergency health care to a participant in the Activity in the event the parent/guardian and/or emergency contact cannot be reached. This authorization includes consent to and authorization of medical procedures by qualified, licensed physicians, dentists, hospital or other emergency medical personnel, as they, in the exercise of their profession and in their sole discretion, may deem necessary. The undersigned understands that (s)he is responsible for all costs and expenses of such medical treatment. Indemnification and Hold Harmless: I also agree to INDEMNIFY AND HOLD Indiana University of Pennsylvania and the State System of Higher Education HARMLESS from any and all claims, actions, suits, procedures, costs, expenses, damages, and liabilities, including attorney fees brought as a result of my involvement in the Activity and to reimburse them for any such expenses incurred. Severability: The undersigned further expressly agrees that the foregoing waiver and assumption of risks agreement is intended to be as broad and inclusive as is permitted by the law of the Commonwealth of Pennsylvania and will be interpreted under such and that if any portion thereof is held invalid, it is agreed that the balance shall, notwithstanding, continue to full legal force and effect. Acknowledgement of Understanding: The undersigned has read this waiver of liability, assumption of risk, and indemnity agreement, fully understands its terms, and acknowledges and understands that substantial rights are being given up, including the right to sue. The undersigned acknowledges that he/she is signing the agreement freely and voluntarily, he/she is assuming all risks voluntarily and intends by his/her signature to provide a complete and unconditional release of all liability to the greatest extent allowed by law.

Please select agreement box when checking out for above statement.

Parent/Guardian : By clicking below "Add to Cart" and filling out the medical authorization information- I understand it serves as my approval and proves I have read and understand the statements above. I understand that my registration information will be shared with IUP's Office of Undergraduate Admissions for recruitment purposes and could include print, email, text, and other communication in the future.